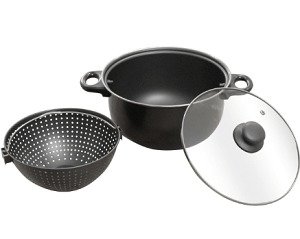 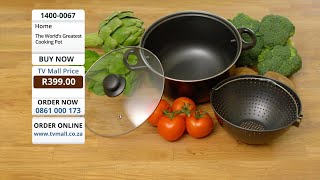 The World's Greatest Pot is a 3.5-quart cooking pot with a built-in straining basket. It's specified as being suitable for cooking virtually all pasta types, along with other small food items like eggs and vegetables. Each black pot has two handles (one on each side) and a transparent lid with a knob. This cooking pot is meant to be cleaned in the dishwasher if you have one, but it's also stated that its non-stick inner surface will enable you to wipe it clean. 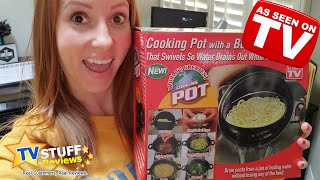 Price is from As Seen on TV Commercial page: worldsgreatestpot.com

When you're adding food to the straining basket of your pot, make sure you don't overfill it. It should not be holding more than five pounds of food at one time. Since many people don't want to be bothered with weighing food before cooking it, a good rule of thumb is that if the lid won't fit comfortably on the pot, the basket's too full. The basket's been designed not to spill as you tip the pot, but if you overfill the basket, that might interfere with the design and some food might tumble out anyhow.

If you normally transfer pasta from a pot to a separate strainer after you're done boiling it, you might lose up to a serving of pasta each time due to a spill in the sink. When you use The World's Greatest Pot, though, you'll likely never waste that much pasta, since it will all remain in your serving basket until it's ready to be put in a dish.

Do not buy The World's Greatest Cooking Pot online before searching Amazon.
- Alternatives or the same items are always available and sometimes at lower prices.

Do not buy The World's Greatest Cooking Pot online before searching Amazon.
- Alternatives or the same items are always available and sometimes at lower prices. 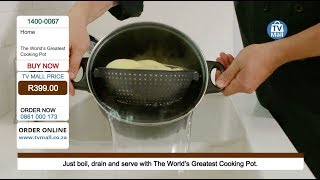 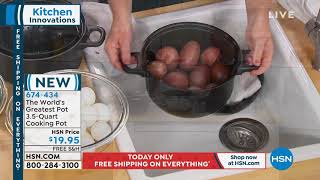 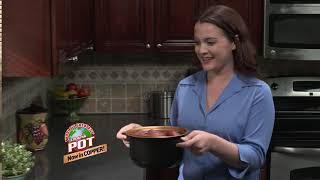 Received a broken pot. Half a dozen emails all went unanswered. Two telephone calls later still nothing. The first phone call said they would send a replacement part. The second phone call had no record of the first phone call. Attempts to get a refund only give back about half of what I paid plus I would need to pay for shipping. Calls to the company get you to some TV advertising company. The examination of the pots show poor construction. I would not recommend these to anybody.

Please do not waste your money, these pots are a great idea but that is the only thing positive about them! I bought 2. One scratched the black coating when the strainer basket slipped into the pot. The second one had a handle broke off when my husband dropped into the sink. Washed both of them in the dishwasher but when they came out the next day, the scratches had already rusted! TRASH,TRASH,TRASH!
I imagine this review will get deleted.

8 of 8 people found this review helpful.

Thank you for the review. I was going to order the pot, but after reading the review you posted,I am not. I know without doubt if I had the pots they would get scratched and I really don’t want to pay for a bunch of rust. Again, thank you for posting.