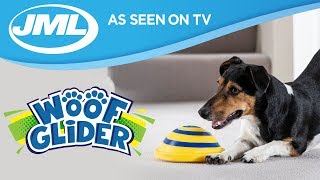 Wag Glider is a soft, dome-shaped rubber toy made for dogs of all ages and sizes. It's stated that this toy is suitable for indoor use, and will slide across various types of flooring, so even if the weather is bad outside, it'll be able to give your dog some exercise. Plus, its soft base and rubber bumpers have been designed to protect your walls and furniture from damage as the toy bumps up against those surfaces. 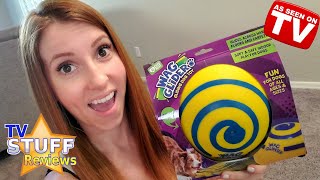 Price is from As Seen on TV Commercial page: wagglider.com

To begin with, dogs will be naturally attracted to the squeaking noise this toy makes, along with its yellow body that's decorated with a bright blue spiral design. If your dog seems apprehensive about the toy at first, you can demonstrate the squeaking noise for them by squeezing it yourself. However, once they find out that they can push the toy along with their nose or paws and make it glide and squeak, most dogs will become excited enough to play on their own. Then they'll be able to entertain themselves for up to hours at a time by pushing the toy, chasing it and pouncing on it, as it only gently bounces up against walls or furniture. Owners and other canine companions can even join in on the fun!

If you've been replacing plush dog toys on a frequent basis after your dog has torn them to pieces, the durability of the rubber Wag Glider may come as a relief to you. Even if your dog is hard on the toy by chewing it and pawing it on a daily basis, one of these may last for several years or more. Plus, you won't have to seek out replacement batteries on a regular basis, as you might have to when it comes to other noise-making toys.

Do not buy Wag Glider online before searching Amazon.
- Alternatives or the same items are always available and sometimes at lower prices.

Do not buy Wag Glider online before searching Amazon.
- Alternatives or the same items are always available and sometimes at lower prices. 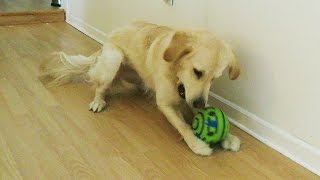 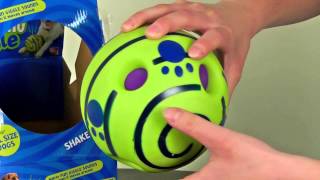 Wag Glider doesn’t glide on floors or carpet! Too expensive for a toy that does almost nothing.

Where is my Order?

I placed my order a week ago and still have not received an email confirming shipment or any communication about any delays in shipping. Where is my order?

My Saint Bernard, Teton age 11 months, absolutely loves this toy. He is a jumper and a chaser of his toys and this has been perfect. It slides across all of our cabin's floors. Carpet to linoleum to hardwood. The only downside to this toy, be prepared to lose it under the couch, under the bed, or other random furniture. Something my baby has done multiple times now. Thank you for this amazing toy that keeps my active baby busy!

Bought 2, they don't slide. Biggest waste of money. My dogs smelled it and walked away, of course, the fact that they won't slide on carpet or hardwood doesn't help. I don't recommend. Save your money.