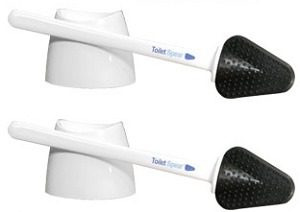 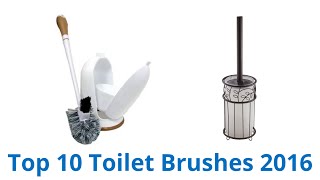 Toilet Spear is a long-handled cleaning brush for your toilet. It has a flexible black head that will clean all the dirt out of any toilet by using a squeegee action. The head also contains dimples that are infused with silver compounds, which help fight bacteria, and the handle, which is longer than the handle of a standard toilet brush, contains these compounds too. Like a standard toilet brush, the Toilet Spear comes with a plastic holder. However, unlike a standard brush, it doesn't contain bristles that will pick up dirt and leave it waiting on the brush for the next use.

When you use the Toilet Spear, it will be much easier for you to clean your toilet. This device, due to its lengthy handle and flexible head that will bend every which way, is able to reach places that a standard toilet brush cannot. You'll even be able to remove all the dirt from your toilet's rim, and get down into the drain to remove dirt from there, too. Plus, cleaning the toilet will be safer and more pleasant, since you won't have to reach as far into the bowl to clean it, and the handle's silver compounds will keep your hands germ-free.

This price was obtained from the As Seen on TV commercial page which was taken offline due to Toilet Spear being discontinued. Toilet Spear may still be found for sale on Amazon or Ebay.

This price was obtained from the As Seen on TV commercial page which was taken offline due to Toilet Spear being discontinued. Toilet Spear may still be found for sale on Amazon or Ebay.

The Toilet Spear's head has been made with a revolutionary flexible design that enables it to bend up, down, left, and right so you can reach every nook and cranny of your toilet. This head picks up and releases dirt like a squeegee, and nothing, including water, sticks to it for very long. Instead, everything simply slides off the device and down the drain.

As you would a standard toilet brush, you can use the Toilet Spear to clean the bowl of your toilet. However, since its handle is longer than that of a standard brush, you won't have to reach as far into the bowl as you normally would.

The inner rim of a toilet is a place where dirt tends to collect, but most toilet brushes are unable to reach this area very well. Fortunately, due to the flexibility of its head, this isn't the case with the Toilet Spear.

Standard toilet brushes won't reach very far down a toilet's drain, so this is an area that often just ends up staying dirty. With your Toilet Spear, though, you'll be able to achieve a cleaner drain, due to the fact that the spear's handle and head will enable it to plunge further down the hole.

The head of the Toilet Spear is black, so it won't be as easy to see how much dirt it's picking up as it would be with a white head.

The Toilet Spear doesn't have bristles, which is beneficial since the bristles on other toilet brushes often just collect dirt and push it around.

When you use the Toilet Spear, it won't drip dirt and water on your floor, as once you're done cleaning, anything on the brush will quickly slide off and into the toilet bowl.

Cleaning the toilet is an easy way to pick up germs, but if you use the Toilet Spear instead of a bristle brush to do so, you'll be less likely to collect any. Each Toilet Spear has dimples infused with silver compounds on its head, and the spears' handles are also infused with these compounds. The silver compounds fight against bacteria, eliminating germs inside your toilet and preventing them from contaminating your hands as you clean.

As with most toilet brushes, the Toilet Spear comes with a holder for easy storage.

While some toilet brushes get smelly over time, due to the fact that the bristles gather and hold onto old dirt , you won't experience this problem with your Toilet Spear. Therefore, there'll be no need for you to hold your nose in disgust when it's toilet-cleaning time!

With standard toilet brushes, you may need to clean your toilet very frequently, since these brushes tend to just push the same dirt around instead of giving the toilet an effective cleaning. If you use the Toilet Spear instead, you'll likely be able to reduce the frequency with which you clean the toilet, since this device will actually obliterate the dirt inside. Cleaning your toilet less often will give you more time to focus on other things around the house.

Do not buy Toilet Spear online before searching Amazon.
- Alternatives or the same items are always available and sometimes at lower prices.

Do not buy Toilet Spear online before searching Amazon.
- Alternatives or the same items are always available and sometimes at lower prices. 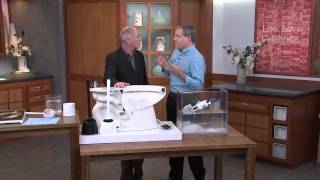 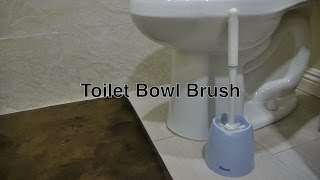 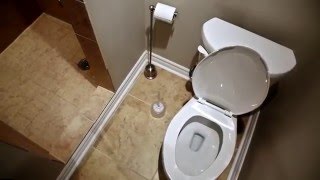 Used it to stir my chili right after cleaning the toilet. Made it taste like poop!

Anytime S&H Overtakes Actual Cost? You Know It's a Scam

Don't waste your time or money.

Cheap flimsy fly swatter for your toilet. Doesn't work and if you return it you're still out about 15$. Don't bother, it's a waste of money.

12 of 13 people found this review helpful.