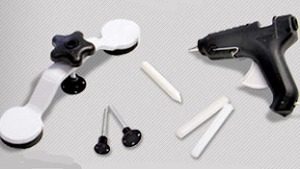 Pops-a-Dent is a do-it-yourself dent and ding repair kit for your car. It’s comes from Motor Up and it’s the fast, easy and economical way to keep your car looking good for a long time. Pops-a-Dent takes care of embarrassing dents and dings in seconds. It’s the same dents and the dings removal system used by professional body shops, yet you won’t spend tons of money that you would when you bring your car to them. Pops-a-Dent is easy to use. Just press the special adhesive pulling disc on the dent, lower the repair bridge under the disc, turn the knob and pop the dent. 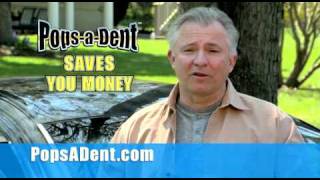 Is Pops-a-dent a scam or a great buy?

Pops-a Dent helps you remove dents and dings on your car that you can’t avoid with daily use. Hails causes dents. Car doors get dings. Shopping carts scratches your car’s surface. You can’t always bring your car to the professionals and spend money on dents and dings removal. With Pops-a-Dent, you can take care of dents and dings yourself easily and economically. And, no one will know you have damaged your car. Pops-a-Dent is perfect for all types of dents, be it large, small and everything in between. Pops-a-Dent comes with three pulling discs, a professional adhesive gun, special adhesive, a knockdown tool and a complete instruction booklet.

This price was obtained from the As Seen on TV commercial page which was taken offline due to Pops-a-dent being discontinued. Pops-a-dent may still be found for sale on Amazon or Ebay.

This price was obtained from the As Seen on TV commercial page which was taken offline due to Pops-a-dent being discontinued. Pops-a-dent may still be found for sale on Amazon or Ebay.

Pops-A-Dent is a dent repair system that allows you to fix any kind of dent on your vehicle in seconds. The Pops-A-Dent is applied to your car, and then you twist the knob and then it pops open, restoring your car back to its original safe. Pops-A-Dent is portable and is the same method that professional car repairmen use to pop dents, but it costs a lot less than going to the body shop. Pops-A-Dent can fix dents from hail damage, shopping carts, and can repair dents both big and small so your car can be looking as good as new in a matter of seconds.

Pops-A-Dent works because it’s the same method that a lot of professional car repairmen use. All you have to do is press the dent removal stem on the affected area, apply the handlebar, and then twist the knob. This pulls the dent upwards and pops it back to its original state before it became dented. Because of its shape, it is very versatile, able to pop a dent of any size and shape so you can get your car looking great without having to take it to a body shop.

Why You Need It

No matter how careful you are, dents will happen to your car. Whether it’s from uncontrollable factors such as hail, or from slipping and slamming your shopping cart into your car, your car will become dented. And while some don’t mind a little damage as long as the car works, if you bought a flashy car, you want it to look good. But car repairmen can be expensive, charging a hundred bucks for a method that can be done again and again from a product that only costs a fraction of what they charge. It is great for both the cautious and the accident prone, because dents in your car will happen. 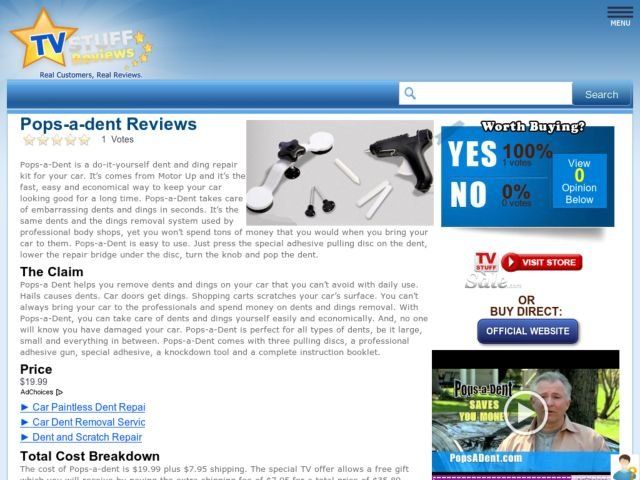 If you own a car and care about how it looks, you don’t have anything to lose by purchasing Pops-A-Dent. Dents will happen, no matter how careful you are, and it helps to have a product that can help pop your dent back into shape without having to take it to the repairman and get ripped off when you can use the same methods as they do at a fraction of the cost. For any driver, Pops-A-Dent is a must-have.

Do not buy Pops-a-dent online before searching Amazon.
- Alternatives or the same items are always available and sometimes at lower prices.

Do not buy Pops-a-dent online before searching Amazon.
- Alternatives or the same items are always available and sometimes at lower prices.

Waste of time buying this product in Australia when the glue gun plug is only suitable to American plug sockets.

I bought this product years ago and it worked great. Just bought it again and it is not the same. Crazy shaped heads to apply glue, too big. Smaller heads get
inti the middle of the dent. They ruined a good thing.

The glue does not stick to the car and falls off when a dry, car is clean, a waste of time cheap glue don't waste your money.

John Ashby - (Durham UK) The same failure that others report has just happened here - I tightened up the screw watching for the dent to pull out but the pulling bridge snapped at the point of greatest stress, namely where the screw knob presses down on the bridge. The plastic bridge is weaker than the metal it is trying to undent. I wonder if I will get my money back?

Pops A Dent Not Reliable

I received Pops A Dent in the mail and I used it the next day. I followed instructions carefully. When I twisted the knob to pull dent out the bolt inside one of the dent removal system pulled completely out and it all fell on the floor. Perhaps it was made too cheap. 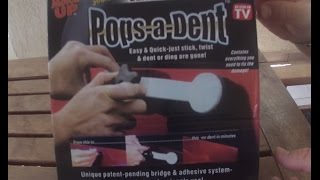 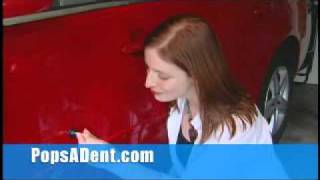 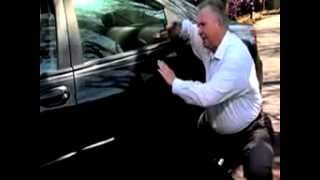