HydraLight Flashlight is a flashlight that uses water instead of batteries to power itself. A single water dip allows up to 100 continuous hours of use and each fuel cell lasts for 300 hours of use. The breakthrough technology used within this flashlight gives it a 25-year shelf life. The versatility of the handle means it can be used either as a flashlight or a lantern meaning it can be used both on the go and as part of an outdoor setting. Designed with camping in mind this flashlight uses new technology to both emit light and charge it's batteries. 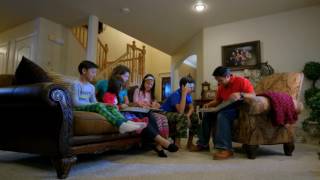 Is HydraLight Flashlight a scam or a great buy?

Within the fuel cell, there is a metal that releases electrodes. These electrodes are activated when water reaches them and this allows the flashlight to charge and release the electricity as light. When the light starts to dim it is possible to recharge the electrodes by simply resubmerging it in the water. The electrodes are released by being dissolved and this means that once they are gone, the fuel cell will no longer work. 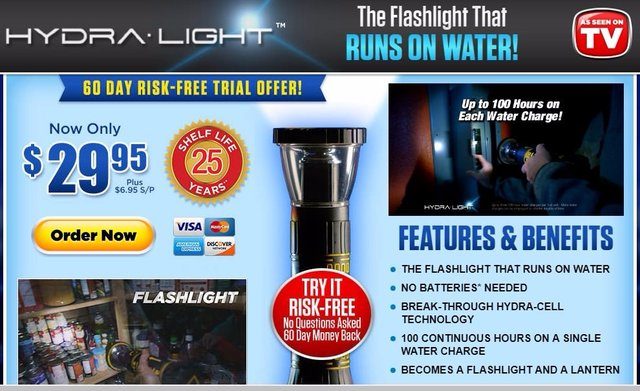 Most flashlights run on battery power. By using fuel cells that are charged through water instead of batteries this is much easier to charge when out and about. The fuel cells themselves are easy to charge and will last for over 300 hours each. Other flashlights that use batteries require you to either carry spare batteries or have the equipment to recharge them. The HydraLight Flashlight only requires fluids to be recharged.

Charging the HydraLight Flashlight is so simple that it saves an incredible amount of time. Simply placing the cell in water for a few minutes will give you enough charge to complete many tasks. Compared to standard rechargeable batteries that can take a long time to give enough charge to be used and often don't last very long, this is a very time effective way of charging a flashlight.

The versatile nature of the HydraLight Flashlight means that it is easy to save time when moving around, too. When taken camping it can be used as a flashlight, as a tabletop lamp, and as a hanging lantern. It can simply be picked up and moved around without worrying about the weight or where it will be placed down again.

Using water to recharge the cell is much cheaper than using electricity and will retain the charge for a long time. Standard batteries that cannot be recharged are very expensive and will often not last very long at all. The HydraLight Flashlight will give 100 hours of continuous light without needing to be recharged which is a lot of money saved in disposable batteries.

The HydraLight Flashlight can also be used as a lamp or lantern meaning it isn't necessary to buy these separately for camping trips.

In today's society, Eco-Friendly consumers seek products such as HydraLight Flashlight that is environmentally friendly. Landfills are consumed with overwhelming amounts of disposed of batteries. This is a known problem for our environment. Non-Eco-Friendly batteries contain harmful material such as Mercury, Lithium, Lead, and Cadmium. Research has proven that these materials can lead to illnesses and produce hazardous chemicals that are released into the air and are bad for our environment when the batteries are not properly disposed of. In which 90% of the time, batteries are not properly disposed of. Unlike the conventional batteries, HydraLight Flashlight batteries are comprised of eco-friendly materials and charged using salt water. Eco-friendly Activist consider this a huge breakthrough in the fight against environmental pollution.

Eco-friendly Activist believe that the Hydralight technology found in HydraLight Flashlights will replace traditional use of batteries. This will improve the quality of life in underdeveloped countries. This will allow these countries to have easy and extensive access to a continuous light source. Especially, since the water used to power the cell does not have to be a clean source of water. Water from a lake or ocean or even dirty water can be used to power the cell. Not to mention, underdeveloped countries will also benefit by saving money on traditional batteries. By lowering the spending on batteries, these countries will contribute to improving the air quality and lowering the risk of illness associated with improper battery disposal.

Do not buy HydraLight Flashlight online before searching Amazon.
- Alternatives or the same items are always available and sometimes at lower prices.

Do not buy HydraLight Flashlight online before searching Amazon.
- Alternatives or the same items are always available and sometimes at lower prices.

My son says, "Just shake the water off after dipping and its good to go".

I got a hydra light and it did not work They sent me a new one right away and it works fine The problem seem to be the switch interesting tech but difficult production standards.

Consumers do not care about your BS environmental crap they care about your deceitful advertising and evil attempts to fear monger to make money on inferior products that end up in landfills themselves because you misrepresent them. 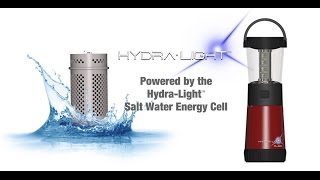 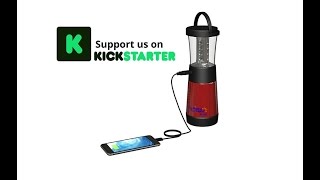